By opnfvOctober 23, 2017Blog
No Comments 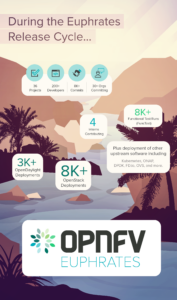 Three years after its founding, OPNFV has carved out a solid niche in the industry as an NFV center of gravity, as an integrator of upstream projects, and as the standard software testing platform. OPNFV Euphrates, the project’s fifth platform release, demonstrates the hard work and industry collaboration of the vibrant OPNFV community that continues to advance open source NFV through containers, improved testing, new features, and deep community collaboration.

The journey towards container integration is one of the biggest changes coming to NFV, and Euphrates begins to take these steps for OPNFV. The way I tell NFV history is that it started by moving network elements to virtual machines (VMs). Then integration of the cloud infrastructure removed the need to know exactly where the VM was running, and enabled more automation. However, the network elements (Virtualized Network Functions or VNFs) have evolved to remove the dependencies on emulating hardware. Thus, the software can now run in containers, which are much lighter than VMs. This in turn enables new innovations that will change the actual software architecture since the overhead of a container is so small, each process can be broken out into its own container. The innovation opportunity that containers create for open source networking is profound.

Improved testing seems to be a recurring highlight of each OPNFV release and the integration and testing effort has made significant progress in providing an extensive set of tools to test the NFV cloud, VNFs, and complete network services. New projects—including Sample VNF, which provides testing of the VIM/NFVI layer with applications approximating real-life application workloads; and NFVBench, which provides an end-to-end dataplane benchmarking framework—have been introduced. Additionally, existing test projects have continued to evolve with new features, capabilities, and test cases.

One of the most important attributes of OPNFV is integration and collaboration. To demonstrate how OPNFV collaborates with upstream projects, OPNFV has introduced the cross-community continuous integration initiative, or “XCI.” This takes the latest and greatest software releases from different upstream communities, tests them in the OPNFV setup, and provides feedback to the community—quickly. Thus, an OpenStack developer can find out if a patch she is about to create will make something break when integrated with the latest OpenDaylight release, running on a platform with the VPP virtual switch from the FD.io project, for example. (Learn more about the XCI initiative in this recent blog post from key members of the OPNFV community.)

Looking ahead, planning is already underway for the next release—OPNFV Fraser (named for the Fraser river in British Columbia, Canada) and the projects that will be part of it are already signing up! And we’re holding our fourth OPNFV Plugfest in the early December to test and try to break the Euphrates release with different hardware setups, and to give the OPNFV project members a chance to plan the work ahead. I invite you to join us in Portland, Oregon.

As a further sign of OPNFV’s maturity, the OPNFV Compliance and Verification (CVP) is now under beta testing. CVP will help enhance interoperability, build the market for OPNFV-based infrastructure and applications designed to run on that infrastructure, while reducing adoption risks and testing costs for end users.

All of these improvements to the OPNFV platform have (and do require) required tremendous effort from across the community. Please see the section below to hear what Euphrates means to some of our core upstream communities. I would like to take this opportunity to thank everyone involved in OPNFV for contributing to the Euphrates release, and beyond!