By Wenjing Chu, Distinguished Engineer and Senior Director of Open Source and Standards at Huawei

In the late 80’s, I was a college student studying computer science in the northwestern suburb of Beijing, where horse driven carts could still be seen on the quiet streets and most of the city’s residents commuted via bikes and buses. The city’s transformation since then has been unprecedented and astonishing. This phenomenal development has been credited by many economists to the simple fact that ideas and products produced by one group of creative people can be used by other groups around the world with minimal friction. When a good idea becomes a common platform, it taps into an ecosystem’s power of creativity, efficiency and economies of scale. It was therefore quite fitting that the OPNFV community recently gathered in Beijing for the third-annual OPNFV Summit.

Recognizing the importance of a common platform based on open source technologies, the OPNFV Board of Directors began discussions to define a compliance testing program not long after the project’s formation. Soon after, the Dovetail project was started to implement and realize such a program by leveraging the entire OPNFV community’s efforts in many fronts, including infrastructure, testing and feature projects. The goal of OPNFV compliance testing is to reduce adoption risk of commercial OPNFV-based infrastructure by decreasing complexity and cost of testing product capabilities and interoperability.

Formation of the CVP

In December of 2016, the Board of Directors approved the Compliance Verification Program (CVP) Guidelines as a governance document outlining strategy and the overall scope. At the Beijing Summit, the OPNFV community announced to the public   the CVP and our intent to launch the program in the second half of 2017. Through this program, products will obtain OPNFV compliance verification signifying that the product:

The First CVP Test Suite: Based on Dovetail 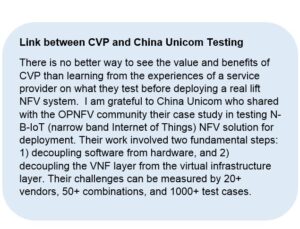 As an open source community-driven project, the test scope and automation toolset will evolve over time by contributions from the active OPNFV and upstream communities, with crucial requirements and feedback from many of the world’s service providers, standardization organizations and other end users. The Dovetail project leverages the prior work from a wide range of community projects, including Openstack refstack; OPNFV Pharos; OPNFV testing projects Functest and Yardstick; OPNFV feature projects HA, IPv6, and SDNVPN; and the entire OPNFV community through their work creating and testing scenarios that produce diverse configurations. The first release of the CVP test suite is being developed based on features and interfaces found in Danube and previous releases. Currently, it covers:

The CVP envisions that applicants can use the toolset developed in the Dovetail project to self-test or to utilize the service of third-party testing organizations that use the Dovetail toolset. These processes and guidelines are also under development by the community.

Vendors–even if their products are based on open source–all use different versions and configurations in a plethora of combinations. This diverse and complex set of differing configurations seen across the industry can be problematic and is often seen as impeding the adoption of open source based solutions in NFV. The OPNFV community is actively working with service providers to bring a common test methodology and test automation toolset, and a common reference validation set, for evaluating suitability of commercial products from service provider lab testing. This is the vision we’re working to realize through the Compliance Verification Program.

For all in the community, from vendors, to service providers, to end users, we invite you to learn more about the CVP and the Dovetail project that is driving its implementation, and invite you to contribute to this community effort. This is an excellent opportunity to help define the test cases that are most valuable to you.  A Chinese proverb says that a journey of a thousand miles starts with the first step. Today, our community is making this important first step towards our shared success in NFV.

For information on how to join this effort, please reach out to info@opnfv.org and watch the below presentation from OPNFV Summit: “Introducing the OPNFV Compliance Verification Program.”