During the recent OPNFV Summit in Beijing, we announced the results of our third Heavy Reading survey, aimed at gauging value of OPNFV as well as the state of NFV deployments among global communications service providers (CSPs). The highlights of the findings are provided in slides, which were presented by Heavy Reading analyst Roz Roseboro in a session during the event, but we would like to provide some additional insight into what we’re seeing this year as the industry evolves.

Digging deeper into the survey data  was telling: While the importance of OPNFV to CSPs overall has increased over the past year, it’s become even more important for those organizations with NFV already in production—70% of those surveyed, in fact. And most of those with NFV in production (86%), are actively following OPNFV, with many (64%) contributing to the project. Note: more than half of all contributors work at companies with NFV in production. Importantly, nearly a third of CSPs with NFV in production have plans to adopt an OPNFV stack as part of their NFV architecture. This tells us is that the work we’re doing is valuable and is being used in commercial solutions across the globe.

Evidence of this is also seen in a shifting interest in NFV technologies (particularly open sourced) that goes beyond software and into hardware. The Open Compute Project (OCP), which aims to apply the benefits of open source to hardware, ranked as the most  important upstream project to the OPNFV community (in addition to OpenStack and SDN controllers). This signifies a turning point; it’s an indication that NFV is getting closer to deployment as CSPs acknowledge the importance of open source hardware designs to the success of NFV implementation. This also means that the efforts we’ve made in the OPNFV community to work more closely with OCP over the past year, are paying off. In fact, OPNFV was successfully deployed on OCP hardware for the first time during our Colorado Plugfest last December held at the University of New Hampshire Interoperability Labs. To that end, OCP has a strong role in the full end-to-end open source network stack, which was discussed at the Big Communications Event in Austin as part of our OPNFV workshop earlier this year. 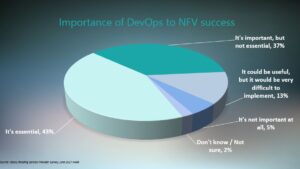 The survey data also reaffirms another key aspect of OPNFV: DevOps. It’s still in the early stages, but DevOps will play a critical role in the success of NFV and this is recognized by 80% of the CSPs we surveyed, with several are either already evaluating various toolchains or working on automation and testing infrastructure. The numbers of those currently building Continuous Integration/Continuous Development (CI/CD) pipelines, or pushing out daily automated patches is lower, but recognition of the importance of DevOps and the role it will play to create a truly integrated pipeline for NFV is encouraging.

All in all, we see the steady adoption of NFV across CSP networks.  Our community is making meaningful strides as an integral player in accelerating the deployment and commercialization of NFV solutions in the market, enabled by the innovation and commitment of our growing community and our upstream integration partners. You can access the Heavy Reading survey slide presentation here, and view Roz’s session video from the Beijing OPNFV Summit here.