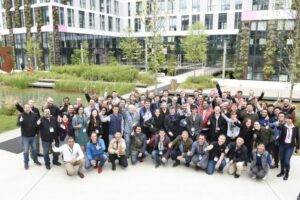 The third edition of the OPNFV Plugfest, jointly organized by OPNFV and Orange, was held at the Orange Gardens, the eco-campus of Orange just outside of Paris, April 24-28.2017. The first OPNFV Plugfest to take place outside of the United States, it brought together around 100 developers and network architects from over 30 partner organizations from across Europe, Asia and North America. We were proud that Orange could host the third edition of the OPNFV plugfest end of April. As a Service provider, actively contributing to OPNFV, managing two Pharos Community Labs, it was a natural fit to host such event.

Plugfests follow the Aristotelian rules of drama: unity of action, of time and of place, and as such, are an incredible humane catalyst for the community. Being able to discuss with all the actors (installers, testing, infrastructure, features) in one place during one week prevents months of complex interoperability tests or remote discussions.

OPNFV Plugfest is also the right place to meet people and evaluate new concepts: power consumption prototype was shared with the community, encouraging the developer to go further and leverage the Pharos Labs federation to collect more information.

Paradoxically, I think that one of the main outcomes of this Plugfest is related to the fact  that we were able to break the system. Stress tests have been introduced in OPNFV Danube and clearly identified some limitations on OPNFV, but also commercial solutions. The capability to identify such problems, to reproduce them, is crucial to evolve towards a real carrier-grade solution. In addition to destructive stress tests, the ability to set up a realistic load test campaign using a commercial virtual loader on a virtual IMS also indicated a better level of maturity of the ecosystem.

The biggest takeaway is that Plugfest provides additional evidence that OPNFV continues to make real progress.  Despite its relatively informal atmosphere as compared to traditional and complementary interoperability events, I think the week was too short for most of the participants. We may also note Plugfests now attract a new type of actor, which includes non OPNFV members, which is fantastic.

The challenges do remain, especially related to performance, qualification and orchestration, and we certainly have our work cut out for us. But OPNFV Danube priorities clearly identified fields to be consolidated: for instance, a complete robustness/stress test strategy still needs to be built.

Learning, sharing and shaping the future: this Plugfest, like the others, was a great success!

More details on the specific outcomes of the OPNFV Danube Plugfest can be found on the official Plugfest white paper, available here.

The next OPNFV Plugfest will take place at the Intel campus near Portland, OR, December 4-8, 2017, and will focus on the upcoming OPNFV Euphrates release. Stay tuned for more details!

Many thanks to Nokia, Huawei and Advantech for having provided on-site equipment. Special thanks to Orange’s organization team, coordinated by Claire Chabrier Larroche and Xiaolong Kong, for their devoted work since the beginning of the year, without which this event could not have happened.