Skip to main content
Close Search
All Posts By

Solving Problems Collaboratively at 4th OPNFV Plugfest for Euphrates and Beyond 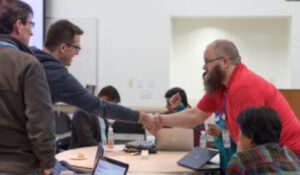 The fourth OPNFV Plugfest, hosted by Intel at their Jones Farm Campus outside of Portland, OR was held on December 4-8, 2017. Intel has been a key contributor to OPNFV since the project launch and their hospitality was certainly appreciated by everyone attending the event. It was also great to see Intel’s Pharos PODs up close as they have been a great resource for the OPNFV community. There were 104 attendees (up 20% from last time), from 30 organizations that included 6 end-users and 6 non-member companies.

There were a lot of OPNFV deployment/testing of the latest Euphrates release on a variety of hardware platforms (3 on-site + 7 remote), finding/fixing bugs, VNF Onboarding, cross-community CI (XCI), SFC, the testing projects, and more. There were also many parallel sessions as the community continues their work on the upcoming OPNFV Fraser release and discussions on improvement areas for OPNFV such as documentation, release process, user support, etc.

With each Plugfest, I continue to be impressed with community’s dedication, passion, and collaborative culture. The presence of multiple project technical leads (PTLs) and key

stakeholders helped accelerate progress significantly and I was amazed at what the community accomplished in 5 days. The next Plugfest will be a co-located event with ETSI at their campus in Sophia Antipolis, France on June 4-8, 2018. Stay tuned for more details!

For more details on outcomes from the OPNFV Euphrates Plugfest, I encourage you to read the Plugfest Report.